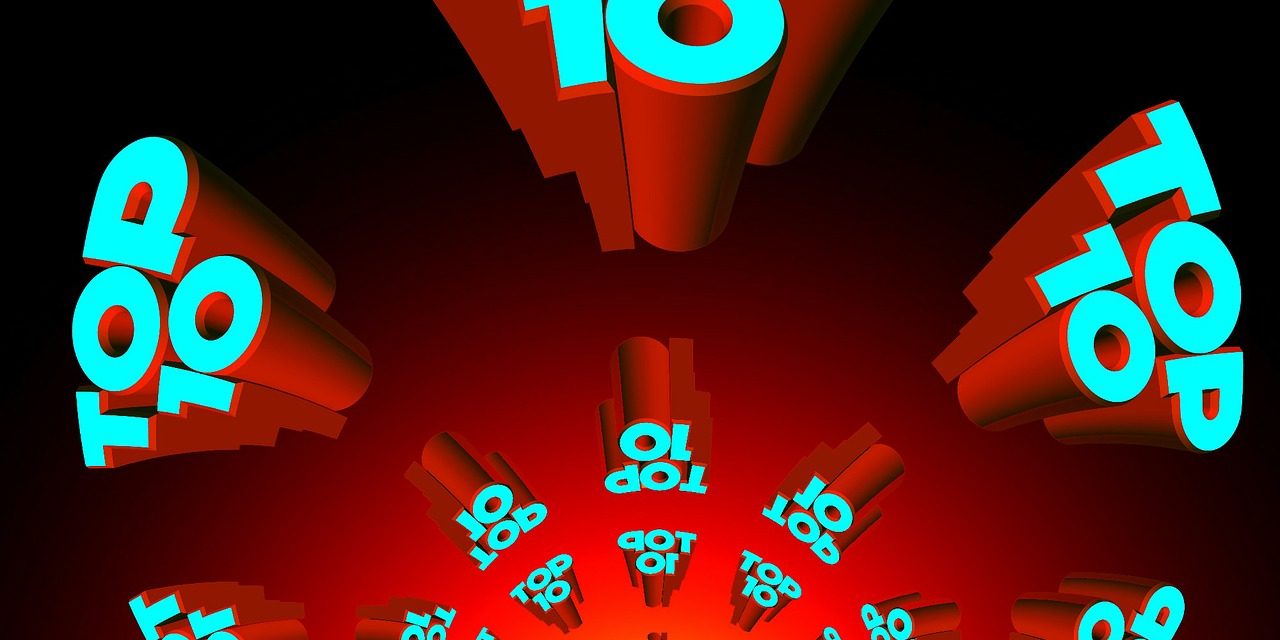 Scottsdale Arizona has made yet another “Top 10” list. This one is a bit different but nonetheless still brag-worthy. Realtor.com collected data to find out where exactly are the best cities for people who love their four legged companions. They came up with a list of 10 cities and Scottsdale ranked up at number 4. Why? Read on to find out.

A. Actually enjoy being woken up each morning with a wet nose in your face?

B. Feel unashamed to dress your pet like a Victorian child, push him around town in a high-end stroller, and talk to him in a baby voice?

C. Have on your Galaxy S7 dozens of pictures of Humbert the Harrier but none of your spouse, parents, or (human) children?

D. Call him on a treat-dispensing videophone when you’re away from home?

If the answer to any or all of these questions is a resounding yes, here’s the news: You are a  dog person—and you’re not alone!

In America, 54.4 million households (44%) own at least one dog, according to the 2015–2016 American Pet Products Association survey, handily beating the share of cat-owning households (35%). Ha! Take that, cat people!

Overall, Americans are sparing no expense for their beloved animal companions. Spending on pets more than doubled from 2001 to 2015, going from $28.5 billion to $60.28 billion, according to the APPA.

So making sure you have the very best for your dog—space to run, grass to sniff, and lots of other nice dogs to play with—is a major factor for many of us in determining where we’ll live.

And it turns out, some cities are just better for having a dog. This week, the realtor.com®data team is sniffing out 10 of the country’s best cities for your tail-wagging friends based on the following criteria: 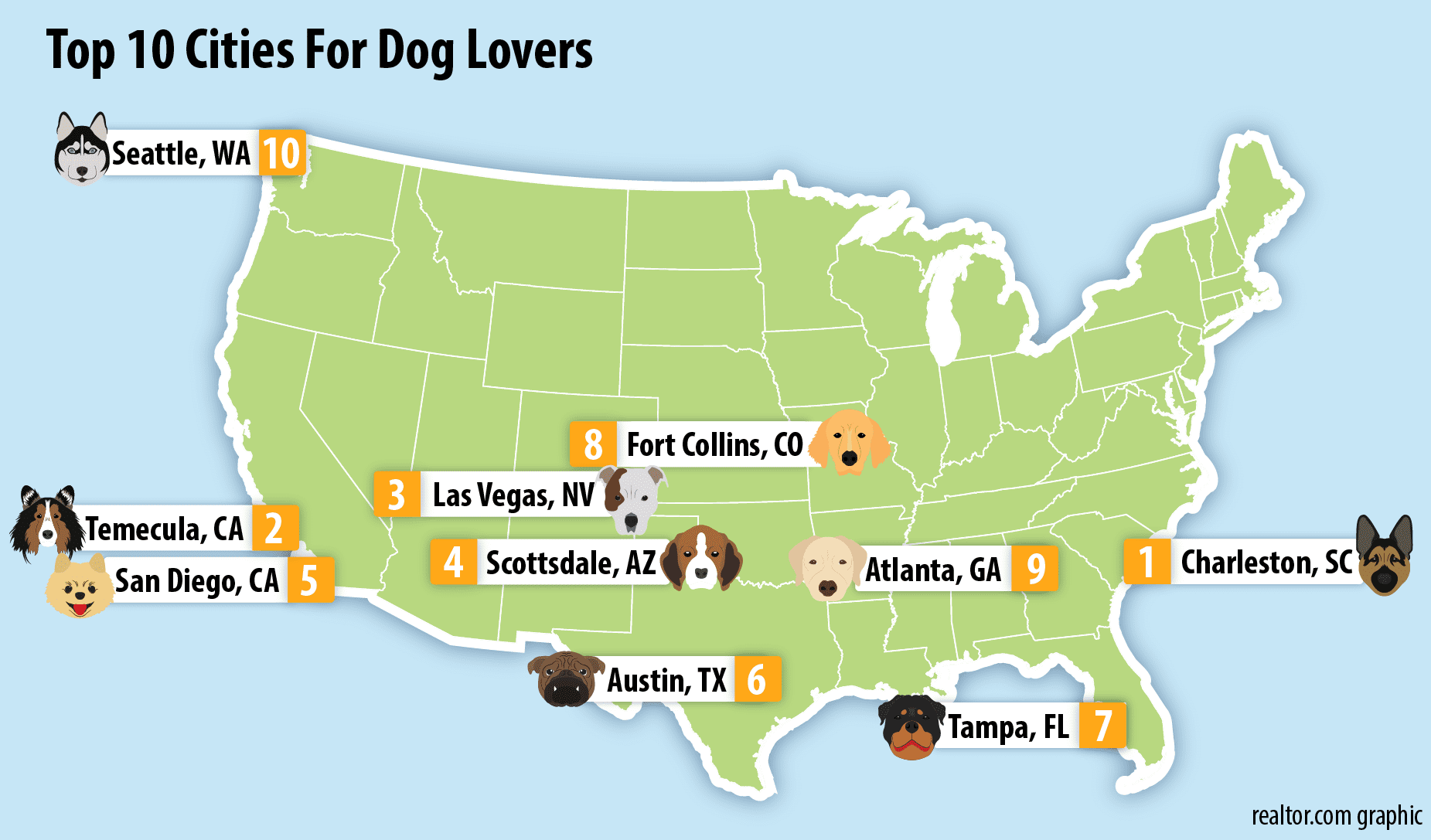 68% of households own a dog

The rapport between humans and dogs in Charleston goes way back, long before the city was named one of the most dog-friendly cities by Rover.com. Poogan’s Porch, one of the city’s oldest restaurants, was named after the dog that began parking himself on the, um,porch in 1976. After being adopted by the owner, Poogan served as the restaurant’s official greeter. (The Poog’s breed, sadly, is lost to history.)

Apart from dog parks and trails, dogs can also enjoy the area’s five dog-friendly beaches—Isle of Palms and Sullivan’s Island beach even allow them to go off-leash at certain hours. The beloved Yappy Hour summer music series at James Island County Park features music and beverages for dog owners and their pups all summer long.You can even take your hound with you on an old Charleston Ghost Tour! For protection, of course.

85% of households own a dog

The charming town in the heart of Southern California’s leading wine region is increasingly known as a pet-friendly destination, as 24 of the valley’s wineries now allow canine companions—even in the tasting room, in many cases. The small town also has 30 pet-friendly restaurants where well-mannered mutts can join you in outdoor seating (and predictably sneak in a bite or two).

Every spring, Wiens Family Cellars holds the Wines for Canines and Kitties event. It includes a live auction of donated items and a Fido fashion show with adoptable dogs strutting down the  dogwalk. And if you want even more do-good doggie events, check out Woofs and Purrs in the Vines each fall, hosted by the Oak Mountain Winery, which raises funds for pets with diabetes.

62% of households own a dog

Pet pampering is a real thing in the City of LIghts: The place ranked seventh in lavish pet spending on Amazon.com. And owners aren’t just shelling out online; when they go out of town, Luxe Pet Hotels offer a boarding service that purports to be “tailored with relaxation and luxury in mind.” That means dog gym, indoor obstacle course, outdoor pool and cabana, king-size memory foam bed, and 42-inch TV in the “celebrity suite.” Think of it as a “Rain Man” suite for your schnauzer.

And just in case you feared that Las Vegas didn’t have its own pet-themed radio show, it does. Vegas Rock Dog Radio is an impressively popular live weekly rock ‘n’ roll series about pets, people, and pop culture. Especially pets.

69% of households own a dog

This wealthy suburb of Phoenix has no shortage of retirees who can spend all day with Fido alfresco. The city boasts a long list of restaurants and cafes with extensive outdoor dining for you and your furball, along with 20 bars where dogs can sit alongside your bar stool. (Don’t knock it if you haven’t tried it.)

Other articles you may find interesting:  Exotic Wildlife in Arizona    Equestrian Estate