Why Baby Boomers Refuse to Downsize 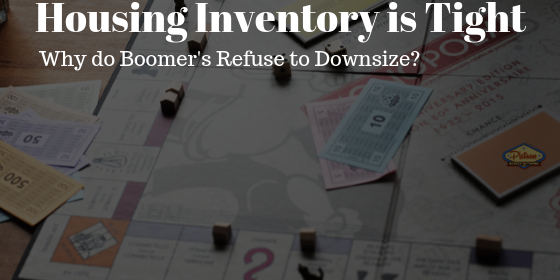 There are reasons Boomers aren’t moving out of their family homes. Baby Boomers are not ready to let go. The approximately 70 million Americans between 54 and 73 years old are not downsizing into smaller homes—even though Boomers living in empty nests have an average of two extra bedrooms. In 2005, more senior households were moving into multifamily than single-family housing by age 75. In 2016, this inflection point didn’t happen until age 80. In a nation with a very tight housing inventory, that might cause more than a few Millennials and Gen Xers to start asking their parents, “Whyyyyyyy?”

To find an answer, we took a deep dive into Baby Boomers’ housing decisions. Here’s what we found. 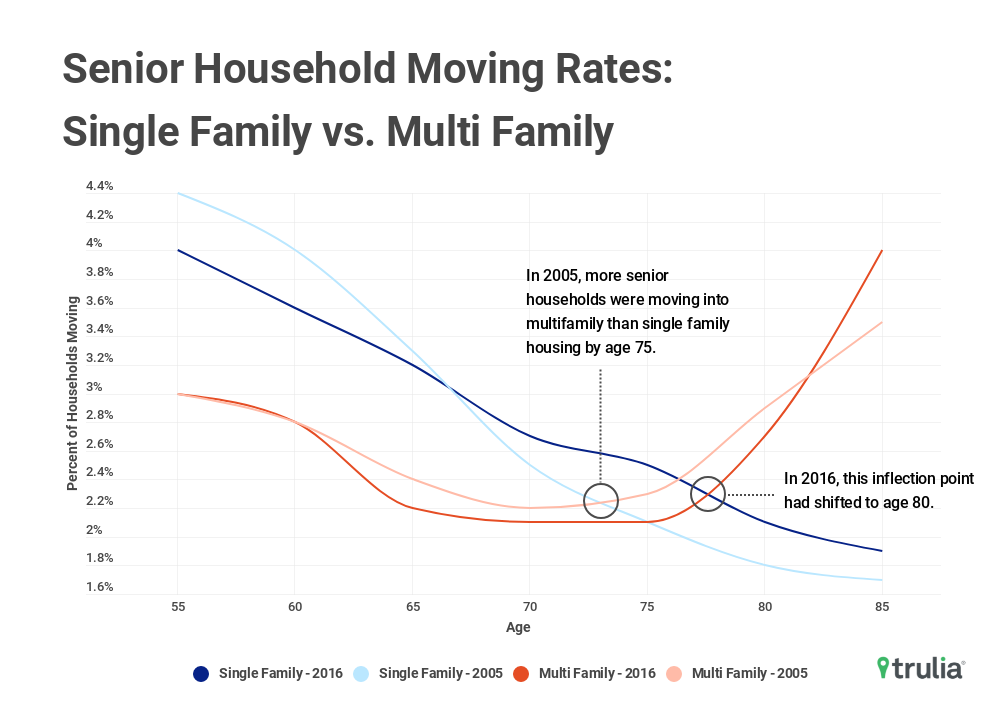 Boomers are still working (and parenting).

Baby Boomers have been breaking the generational mold since the Free Love era. Today, they’re working longer as seniors. The proportion of household heads age 65 and over who are still in the labor force rose to 19.3 percent in 2016 from 15.9 percent in 2005.

Boomers’ households function a little differently in another way, too. The children of Boomers have delayed moving out of their parents’ homes. In 2016, 16.1 percent of senior households had younger generations living with them, compared to 14.4 percent in 2005. As retirement and the kids moving out are often triggers for downsizing, it’s no wonder Boomers are sticking with their old digs—many still need them.

Many places across the U.S. are short on housing inventory, and affordability isn’t going in the right direction either. It might be easy to look at Baby Boomers hanging on to their homes and point the finger at them. After all, if they’re not moving into smaller homes, the cause of the bottleneck seems obvious. But we found that in places where housing inventory is most needed—which are also the most unaffordable metros in the nation—seniors are renting, just like the rest of us. 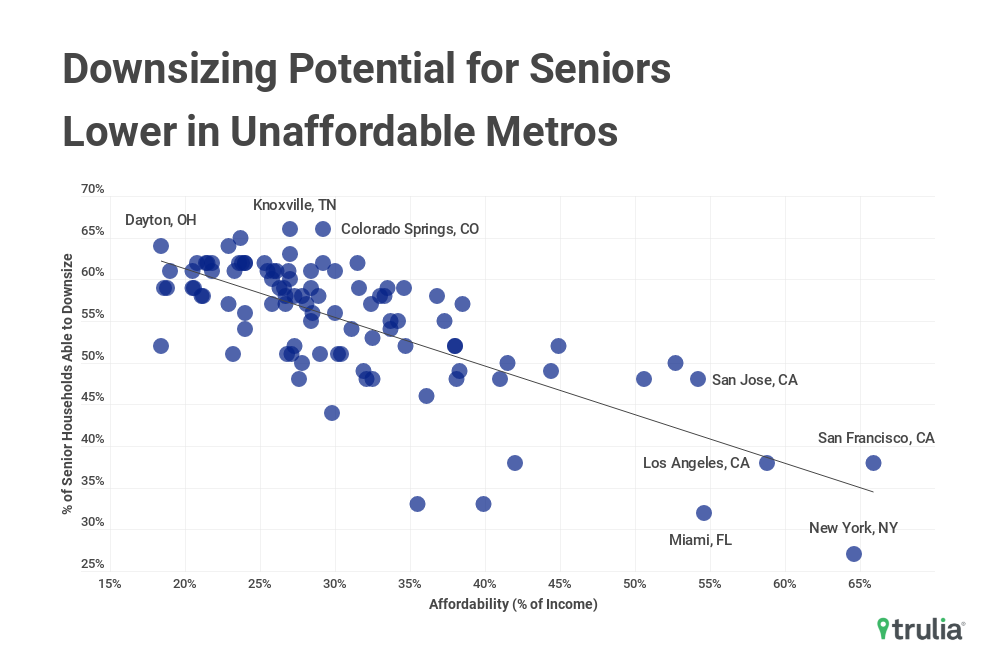 The stand-still does matter.

But about all of those empty rooms in the metros where Boomers are staying put: There is a noticeable shortage in housing that would be appealing to growing families. This is also true in more affordable metros like Knoxville, Tennessee, where inventory decreased 12.4 percent year-over-year during the second quarter of 2018—even though Knoxville has a high percentage of seniors who are in a position to downsize (66.4 percent).

Now, the good news. The prolonged Boomer stasis could mean their eventual migration into smaller homes is inevitable and incoming. “While some observers think Baby Boomers are contributing to the inventory crunch by staying in place, others believe Boomers are holding on to their homes to time the market and that a massive sell-off is on the horizon,” says Alexandra Lee, housing data analyst for Trulia’s Housing Economics Research Team.

Just don’t hold your breath for an inventory boom if you’re in a more expensive metro. “The higher the income required to purchase the median home, the lower the proportion of senior households that could downsize,” Lee says… Finish reading here

Click To See Available Homes in the Greater Scottsdale Area